It is the most important purchase of the year for most Marrakchi families. And one that many of them struggle to afford. Too many people take out a credit to pay for a sheep that they will kill on the day of Eid Al Adha, the Festival of Sacrifice. And the country markets are booming. 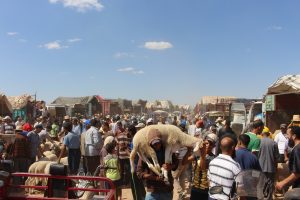 A man carries away his sheep from the bustling market

You can now buy your live sheep in the car park of the Marjane supermarket in Marrakech city centre, yet the real experience of preparing for Eid is still to be found in the sheep markets held in the countryside beyond. Today I visited the market on the Fes Road, some 5 miles from the city limit. A pall of dust hung in the air. Cars had overflowed the designated car park. Throngs of people on motorcycles and transporters filed and in out of the site. A token policeman stood picking his teeth where the main Fes to Marrakech road was brought to a standstill by a constant flux of sheep. Sheep in pick-ups. Sheep on motorbikes. Sheep on bicycles. And sheep on shoulders. 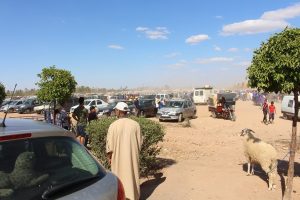 The site of the market lies beneath a cloud of dust

Farmers have come from as far as Beni Mellal, some 150km away, to sell their sheep to the City. There are lots of buyers. And the only currency is cash.

The Festival of Sacrifice refers to the holy story of Abraham, called upon by God to sacrifice his son. Reprieved at the last minute, he is able to substitute a sheep. Today, the sacrifice can be of a sheep, a goat or even a camel … depending on the circumstances of the family. In fact, there is no moral or religious obligation to sacrifice an animal. Yet there is fierce social pressure. In the days leading up to the festival there is just one question the neighbours ask – “Have you got your sheep?” 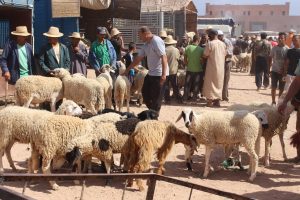 Sheep wait in the sun

The market is dusty and dry. The few orange juice stalls are doing well. The grills near the car park are smokey with cooking lamb. And the constant flow of people and sheep makes sure the dust doesn’t settle. Prices of live sheep are slightly down from last year, I am told. You can get a decent Sardi sheep, good enough for a small family, for about 150 euros. Last year it was 200. That is the equivalent of a months wages for a labourer. 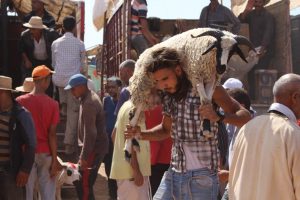 The atmosphere grows dizzy as the afternoon wears on under the bright sun. Many more families can now sleep easier – they have their sheep. The animals are being transported back to the winding alleyways of the Red City. They will be kept on the roof terrace. Or in the car park. Or even in the apartment. The important thing is that they will be sacrificed as a token of mans humility before God. 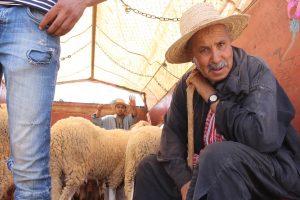 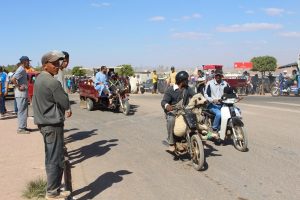 Getting the sheep home can require improvisation