What a fabulous way to spend a few hours when in Marrakech! A walk Around Marrakech Ramparts is both easy to do (we did it carrying our 2 month old baby) and fascinating. There is history and there is culture. From the famous gates of Bab Doukalla and Bab Agnaou to the remote Bab Aghmatt and the little known Bab Lalla Aouda Essadia, the Ramparts of Marrakech impress by their grandeur and their gravitas. 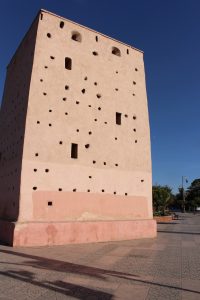 A tower at the newly created gate on Avenue Mohammed V. The old Bab Nkob lies 100m to the left of here.

We started and finished our tour walking clockwise from Bab Moussafa, by the taxi ranks. It took us about four hours to cover the 16km of the walls. We also stopped for lunch in the Kasbah, so made a full day of it. 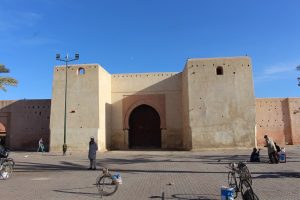 The weather was perfect for a late November stroll – 28c and bright blue skies. We came across some serious work being done on new parkland along the ramparts. The City is developing the Around Marrakech Ramparts as an attraction, both for foreign visitors and the local population. 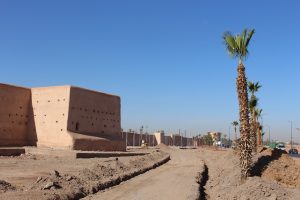 Near Bab Aghmatt in the south new parks and facilities have already been completed and the change is remarkable. Where once there was wasteland now there is green space. 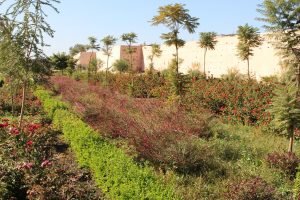 Just a couple of years ago this was ugly wasteland

There are some great photo ops along the way. One of my favourite areas is around the Mellah and Berrima. These areas are not yet well known to visitors. 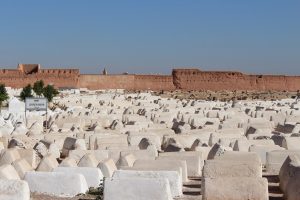 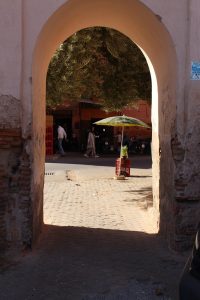 There are some very elegant gates to admire, as well as the Ramparts themselves. The quaint and historical Bab Ksiba in the south of the Kasbah is a favourite. 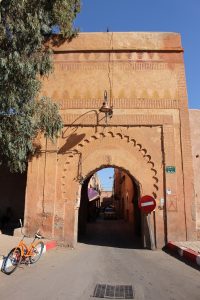 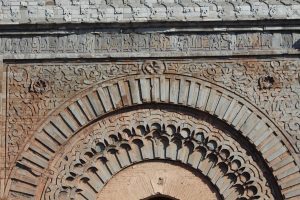 Possibly the most spectacular portion of the ramparts stretches from Ibn Zohr hospital past the Mamounia and Royal Mansour Hotels and towards Gueliz. The walls are well maintained and glow in the sun. 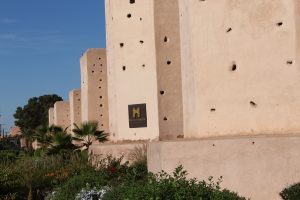 Immaculately maintained portion of the ramparts

All in all we had a superb walk. Some beautiful sights and some earthy realities too – the graffiti and the mess around some of the eastern and southern ramparts could be dealt with, for instance. Yet we weren’t bothered once on our tour and we were welcomed wherever we went. 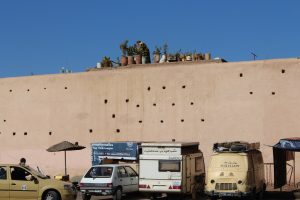 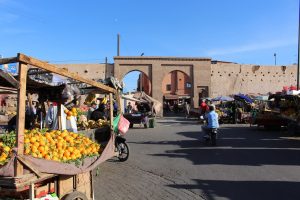 Our start and finish point at Bab Moussafa 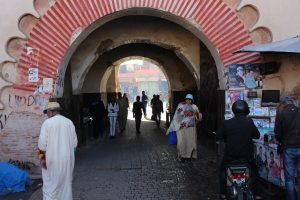 So, I hope this article inspires one or two of you to undertake the walk. It’s a great introduction to the Medina as it really helps you to orientate yourself once inside the winding derbs of the old city. Thank you for reading! 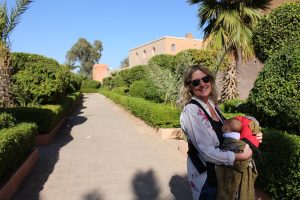 A family stroll – here by the Kasbah Ramparts